When you’re first getting started with cloth nappies, the range of different types can seem overwhelming. All-in-ones? Pocket? Flat? Fitted? Fear not — the ideal nappy for you, your baby, and your situation is out there. Read on for a run-down on different nappies, their advantages and disadvantages, and some tips on finding what works best for you. 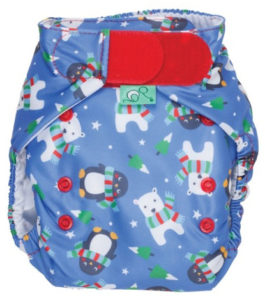 All-in-one (AIO) nappies, exactly as their name indicates, are a single-piece nappy which goes on just like a disposable. They have a waterproof outside, a thick absorbent core, and elastic around the legs for a snug fit. Some all-in-one nappies are sized, so you will need to trade up the sizes as your baby grows (you can of course sell on the old ones!), while some are ‘one size’ or ‘birth to potty’, which use poppers or velcro to adjust the size as your baby grows.

Advantages: The biggest advantage of AIO nappies is that they’re extremely easy to use. If you’re switching from disposables and want as little change as possible, AIOs may be your perfect nappy. That also makes them great for nurseries (where the staff may not be used to cloth nappies) or for other situations where your baby’s carer is uncertain about cloth. They’re great too for a super wriggly baby or toddler as they make for speedy nappy changes.

Disadvantages: Because the thick absorbent layers are built into the nappy, they can take a long time to dry (although some AIOs, like Tots Bots, have a fold-out core so they dry faster). So you might need a few more nappies than with some other types, to make sure you always have clean dry nappies available. The fact that AIOs only have one line of elastic may make them slightly more prone to blowout, especially with newborn poop. And they’re usually not suitable for night-time.

Use AIOs if: you just want to be able to put the nappy on without any preparation or fuss, and you don’t mind them taking a bit longer to dry. 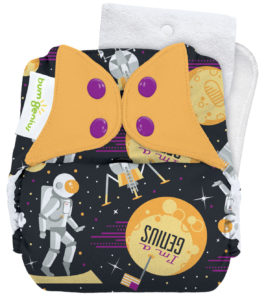 A pocket nappy works a bit like an all-in-one, except that instead of having absorbent layers built into the nappy, there is a ‘pocket’ which you stuff boosters into. Once the nappy is stuffed it goes on in one piece just like a disposable and is secured with velcro or poppers. Like AIOs, they come in both sized and adjustable one-size versions.

Advantages: Pocket nappies, due to the way you stuff them, are very adaptable. You can put in as many boosters as your baby needs. Once stuffed, they’re very easy to use, so they’re good for nurseries if you send them pre-stuffed. They dry faster than AIO nappies, since you either pull the boosters out before they go in the wash, or let them come out in the washing machine. You may be able to use them for nighttime with extra boosters to increase absorbency.

Disadvantages: You do have to stuff them before use—it’s quickest if you do the whole batch at once when you take them off the line or out of the tumble dryer. Like AIOs, they have only a single line of elastic so may be more prone to blowouts than two-part nappies, especially in those first six months.

Use pocket nappies if: you want an easy-to-use option that dries quickly, and you don’t mind spending a few minutes stuffing them after they’ve dried. 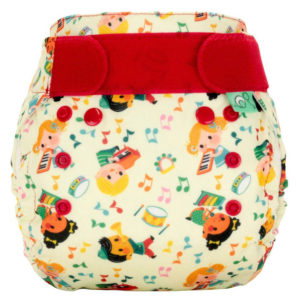 Two-part fitted nappies consist, as you might have guessed, of two parts: a fitted absorbent part which has elastic around the legs and goes on much like a disposable nappy, and a waterproof wrap which goes over the top. You can generally reuse wraps a few times before washing them. Most two-part nappies fasten with velcro, but a few use a nappy nippa. Like AIOs and pocket nappies, two-part nappies come in both sized and one-size/birth-to-potty types.

Advantages: Having two lots of elastic around the legs (one in the absorbent part and one in the wrap) makes for excellent containment. They’re fitted to baby’s shape, there are loads of designs available, and they’re very absorbent. They also work well at night, especially if you add a booster or two.

Disadvantages: You need to make sure the wrap goes right over absorbent part, with nothing sticking out under the elastic, to avoid leaks. This makes them slightly harder to use than pocket or AIO nappies, so they may not work so well for nursery, or for other carers unfamiliar with cloth. They can be a bit bulky, especially the birth-to-potty ones on a small baby. And like AIOs, they take longer to dry as the absorbent part is thick.

Use two-part nappies if: You want excellent containment, including overnight, you don’t mind longer drying times, and you’re happy to take a little more trouble putting them on. 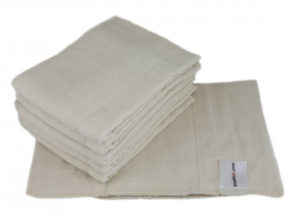 Flat nappies are the old traditional type of nappy. They consist of a square or rectangular piece of material (usually cotton, sometimes bamboo) that you fold up, fold around your baby, and use a nappy nippa (no need for a pin these days!) to fasten. A waterproof wrap goes over the top. You can use terry squares, which are just flat pieces of material, or prefolds which have an extra layer sewn into the middle. ‘Prefold’ is a bit of a misnomer though as you do still have to fold them into the nappy shape.

Flat nappies used to be one size, and you just folded them differently as your baby got bigger, but these days you can get them in newborn, baby, and toddler sizes.

Advantages: They’re very hard-wearing and last almost forever, and they’re the cheapest type of cloth nappy. They’re flexible, because you can fold them however you like, which makes them particularly good for skinny newborn legs. Terry squares dry very quickly, prefolds with their extra layer a bit less so but still faster than AIOs or two-part nappies. If you use flat nappies and then change to a different type, you can still use them as cloths, or as liners or boosters in other nappies.

Disadvantages: They’re harder to use than other types of nappy, as you need to fold them the correct way and then use the nappy nippa to keep them folded. This does become second nature very quickly — babies need changing sufficiently often that you get a lot of practice! However they are probably a bad fit for nurseries or anyone who’s nervous about cloth nappies.

Use flat nappies if: you want a cheap, hard-wearing solution, and you don’t mind needing a bit of practice to get the hang of them.

Most nappies are made of either microfibre, cotton, or bamboo. Waterproof wraps (and the waterproof outside of AIOs or pocket nappies) are generally made of PUL (plastic-coated waterproof fabric).

Microfibre is very absorbent, and dries incredibly fast, but suffers from compression leaks, which means that it tends to leak if it is squeezed, either by being sat on or by a tight buggy strap. It’s great if you’re happy to change regularly (every 2-3 hours) so is a good fit for young babies when you’re changing often anyway.

Bamboo is also highly absorbent, and tends to trap liquid so compression leaks are rare. However, that also means that it dries slowly. The absorbency makes it great for night-time or long car journeys. Bamboo may be environmentally better than cotton.

Cotton is absorbent, dries reasonably fast, and is very long-lasting; your cotton nappies should last through several babies.

How many to buy?

You’ll need 10-12 nappies per day for newborn, and 6-8 for older baby; so how many you need depends how often you want to wash. It may be worth washing daily during the newborn stage; for an older baby 18-20 nappies is a decent number to allow you to wash every 2-3 days. If using a two-part system, you need 4-6 wraps for 18-20 nappies.

You may also want to use a liner (fleece or disposable), which can help your baby’s bum feel drier, but it’s not essential. (If you’re using nappy creams then definitely use a disposable liner. See our article for more on washing and caring for your nappies.)

If you’re not sure which type you want, you can try buying a couple of each type, and try them out to see which suit you best. An advantage of used nappies is that it’s cheaper to do that; plus you can sell on nappies that you don’t like or, if using sized nappies, ones that your baby has grown out of. Some nappy sellers will also offer a ‘selection pack’ of nappy types, and there are a few cloth nappy ‘libraries’ where you can rent nappies to test out.

If you’re starting on cloth with a newborn, bear in mind that ‘birth to potty’ nappies may not work right at the start, as newborns often have quite skinny legs. You could start out with prefolds or newborn nappies, then move onto a birth-to-potty style as your baby gets bigger. You can mix-and-match in different situations, too, as well as over time—for example, using AIOs at nursery and two-part nappies at home and overnight.

Once you’ve considered all the practicalities, bear in mind that choosing a nappy based on a particularly cute print is perfectly reasonable—make the most of the fact that cloth nappies can be pretty as well as eminently practical!